Dontnod earned the goodwill of fans around the world with its emotional, progressive, and thrilling Life is Strange series, and now Twin Mirror looks to be the French studio going in hard on the thriller noir genre. Originally announced as an episodic title of three chapters, a new trailer and preview demo has revealed the entire game will be released at once later in the year.

Journalist Sam Higgs has returned to his quiet hometown of Basswood, West Virginia, to attend the funeral of an old friend, Nick. When he discovers foul play may have been involved in Nick’s death, Sam investigates the circumstances himself and unearths painful memories of a past life he is reluctant to revisit. 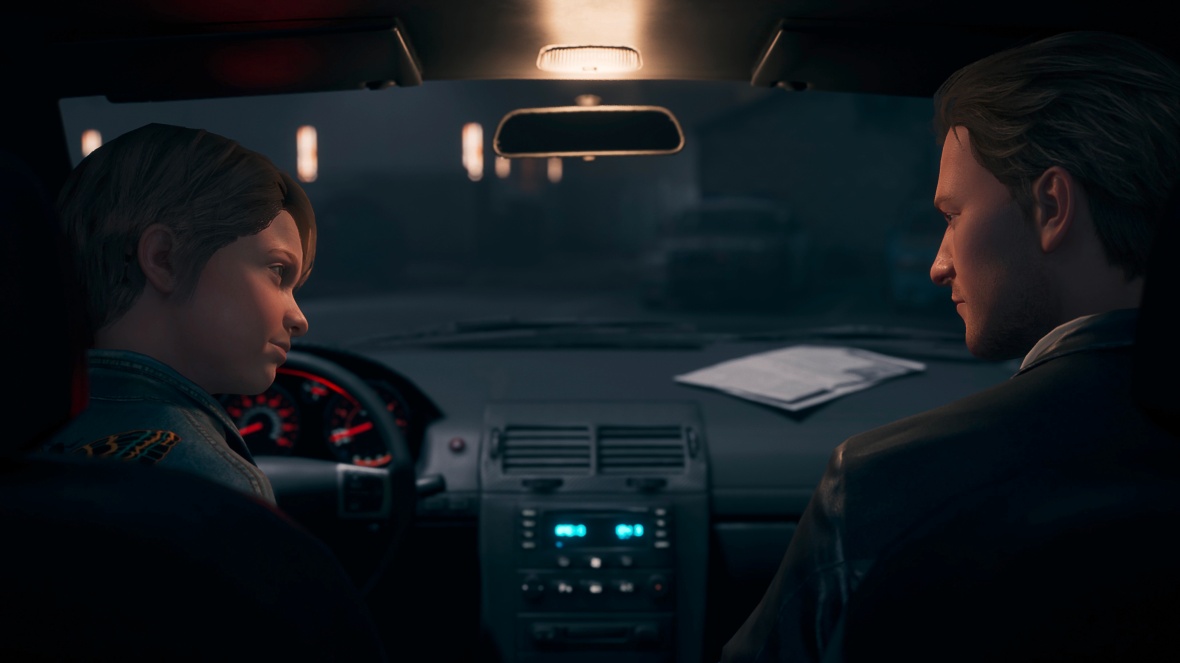 Basswood may be a fictional place, but it’s rooted in the gritty reality of modern small-town America. It bears resemblance to rural settings from crime TV serials such as Twin Peaks or Netflix’s Ozark, and Dontnod has applied a strong cinematic feel to the presentation, using classic visual conventions with moody lighting and dramatic tracking shots. The composition of this cinematography delivers a vibe close to film thrillers like those directed by Fincher or Scorsese.

One of the most important features in Twin Mirror is Sam’s ability to enter his ‘Mind Palace’, the analytical part of his brain where he can piece together clues and remember past events to help him discover new leads. The concept is based on an Ancient Greek psychological technique where a person may be able to recall distant memories by visualising a familiar environment in their mind. Sam’s is represented as a crystallised void with floating platforms featuring key moments from his life. The given example involves an unpleasant recollection of when his ex-girlfriend rejected his marriage proposal, one of the reasons he skipped town.

Meeting characters in the Mind Palace will also unlock their biographies to read later in Sam’s journal, providing further insight into their personalities and history with him. These entries update frequently as the story unfolds, allowing you to access important information when you need at the press of a button, letting you make better informed decisions when the situation calls for it.

Then there’s the memento section of the journal, where you keep a record of all discovered collectable items relating to the characters. In the first chapter, Sam brushes away a patch of moss from a tree, revealing his and Anna’s initials carved into the side. Inspecting the memento closer reveals the backstory behind it, offering new insight into Sam’s history in Basswood.

As with past Dontnod titles, the environment also plays a part in Sam’s investigation. Nearly everything he finds can be stored in the Mind Palace for safekeeping to recall later, so it’s imperative for you observe anything you can, as even trivial discoveries may prove to be important in the future. This also helps to build up the lore of Basswood, with signs, items and other knick-knacks providing a context for the world and characters in the narrative.

The clue’s in the title, but duality is a key theme of Twin Mirror. Choices are a huge aspect of gameplay, with specific breaks in the story having you choose between a set of (usually binary) options. These events may have tiny, indirect outcomes, or the consequences could be much more impactful and even affect the ending. In addition to this, Sam will often confer with an individual known simply as the Double, an alter ego existing within his subconscious. The Double will often counter Sam’s point-of-view, allowing you to reflect on your options when making a decision. It’s important to consider the Double’s views, but he may not always be trustworthy. The jury’s still out on whether this is just another “multiple personality” story (ew) or a personified representation of his analytical mind. We’ll know more with the full release.

Twin Mirror is shaping up to be Dontnod’s most beautiful adventure yet. The stylistic character art of Life is Strange is still present, but the environments are sharper and more realistic. The immersive HUD pops in and out when necessary, and overall it looks to be accessible to casual players who are taken by the gripping story, deep worldbuilding, or interesting characters. It’s expected to release later this year on PC, PlayStation 4 and Xbox One, with the PC edition having a 12-month exclusivity deal with the Epic Games Store.