So as not to erase the hard work of many developers, any reference to ‘Kojima’ in this review refers to Kojima Productions as a whole, whereas the individual creator will be mentioned as ‘Hideo Kojima’.

Besides the first hour of Metal Gear Solid 4, I’d never played a Hideo Kojima game until now. I know it’s quite bizarre, as someone interested in stealth and action games to not have touched his work, but everyone has knowledge gaps even in their areas of expertise. Death Stranding is my introduction to his games.

Years after a mysterious apocalyptic event populated the world with supernatural creatures made from tar, deliveryman Sam Porter is tasked with travelling west to connect the surviving cities and settlements of America onto a joint system called the Chiral Network. The resulting ecological effects of this cataclysm has now twisted the country into an unrecognisable wilderness ravaged by hazardous terrain and hostile terrorist factions.

Look at any screenshot of Death Stranding and you may mistake it for the rocky landscapes of Iceland, a country known for its mossy lava fields and black sand beaches. Combined with Hideo Kojima’s affinity for using music by Icelandic rock band Low Roar (of which this is powerfully used a lot throughout the story), and its clear the culture has had a major influence on the look and feel of the world design. As uncanny as it is, Kojima has aimed for photorealism by creating a gorgeous world of knotted hills and disfigured mountains.

These panoramas are striking, but they also work in tandem with a movement system evocative of real-life hiking. Whether it’s across flat land, up an incline or down the side of a mountain, every step you take must be treated with absolute caution. One incorrect stumble can tip your balance and send you – and whatever you’re carrying – flying.

How your inventory is organised will affect it too, with heavier cargo resulting in you being slower and sluggish with your movement, while also leaving you vulnerable to enemy threats. It’s brilliant, and it’s also Death Stranding’s breakout feature. Having to be mindful of your step and packed equipment is a refreshing take on traversal in games, where one wrong footstep on the tiniest incline can drastically change the course of an entire journey. You must brave this harsh environment whenever you accept an order from a settlement’s terminal, making it a strategic decision too on whether you want to deliver the two heavy boxes of ceramics, or the dozen lighter crates of alcohol. You’re rewarded for completing these missions with a Facebook-style likes system, where your time, condition and how well you’ve linked with other players affects your score. Being a quicker, efficient courier means more likes, which unlocks new nibbles of lore as well as increases to specific stats. The inclusion of such a system is odd given the gritty apocalyptic setting, and often feels very out of place, but it works suitably with the omnipresent social networking multiplayer.

This isn’t true multiplayer in the traditional sense. You never physically meet another player but think of it as a more hands-on approach to Dark Souls’ message and bloodstain features. When you’re out exploring the world, you can discover various structures placed by other players in their own games. These creations may involve bridges covering a large river, or a zipline to help you ascend a mountain, and your space will be colonised by the constructions just as much as other players’ games will be by yours. This also extends to reading signs left by others, as well as finding abandoned cargo with which you can finish the job for them. 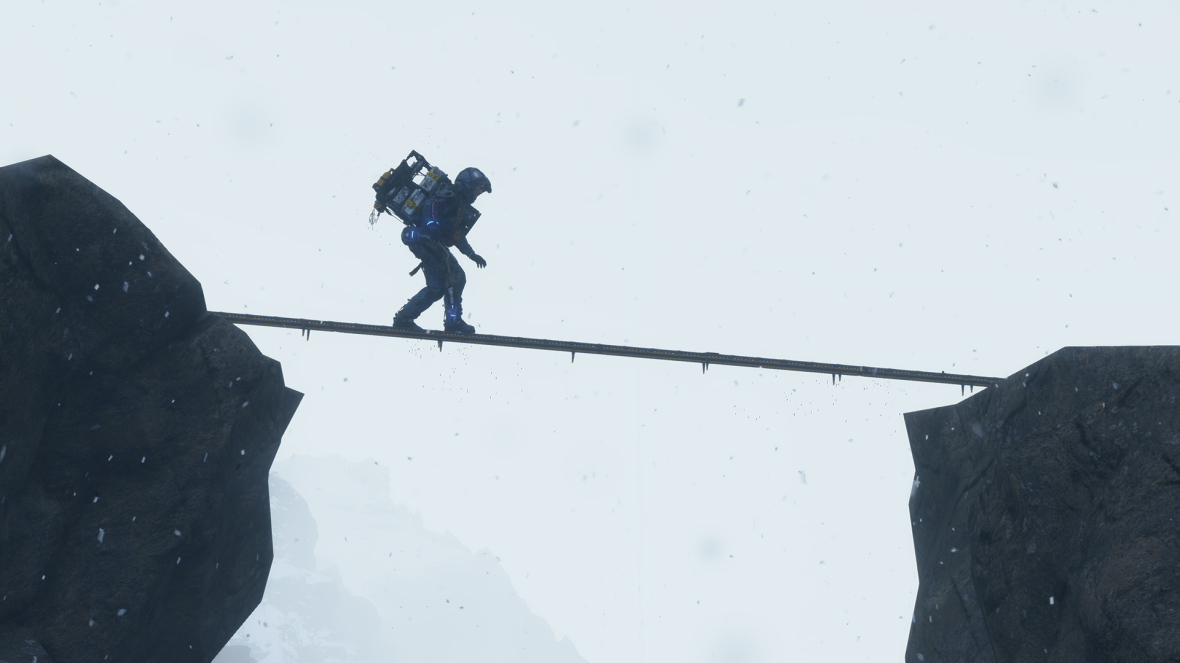 Being able to network your game with other players links with the game’s main theme of human connection. While it’s entirely possible to ignore it and play in offline mode, it’s not Kojima’s intended experience and will make everything just a little bit harder for you. These social features have you feel like part of a greater effort to rebuild a decaying world piece-by-piece, and it not just complements the motifs of the story but gives you a sense of belonging to a larger community.

Speaking of story: there’s a lot of it, and it mostly isn’t good. The narrative is padded, there’s huge chunks of plot at the beginning and end but very little substance in the middle. Much of it involves meandering between different cities, meeting a few characters who deliver complicated monologues of exposition and then completing the same repetitive delivery orders from the terminals. Most of the game’s cast are monotone husks who overexplain everything from their motivations to obvious plot details, even going so far as to reveal key story beats through dialogue before they’re shown later.

I’m not one to live and die by the ‘show don’t tell’ rule, as I know the opposite has its merits, but the writing doesn’t trust the player to make these inferences for themselves. Which is fascinating, because a lot of it is obvious and clichéd too (characters wearing masks to represent hidden motives is a weary one). And the worst crime is Death Stranding wastes its talented cast on this writing. If you’ve ever watched an interview with Norman Reedus, you’d see he’s charismatic, funny and very charming. But Sam Porter is boring, dull and serious nearly all of the time, even in his more comedic moments. Similar things can be expressed about Léa Seydoux and Tommie Earl Jenkins. Mads Mikkelsen may be the outlier here, who consistently gets the best scenes and performs the hell out of them.

One of the main effects from Death Stranding’s apocalypse is the appearance of timefall, a type of rain that accelerates the aging process of anything it touches. This damages cargo and vehicles as they start to deteriorate sooner, but it also signals areas occupied by BTs, invisible undead creatures that prove to be dangerous if provoked. Due to their immeasurable strength and amplified senses, stealth is crucial to slip through these zones untouched. And that baby you’ve seen in the promos? You use it to scan for nearby enemies, with the blinking sensor spinning faster the closer they are.

Death Stranding is not a horror game, but these situations are scary and tense. There’s something so terrifying about your first encounter with a BT that your initial instinct is to turn around and forget about the current delivery. But a problem arises in that these monsters become little more than a background prop once you learn how to effectively deal with them. Soon after realising this, there were very few moments where I felt like I was in any real danger, and the scare factor wore off quickly.

The other class of enemies aren’t much better either. Various camps dotted around the map belong to factions known as MULEs, hostile raiders who want to rob you of your cargo. Naturally your best instinct is to avoid them, but these bases also have valuable loot packed into secure lockers, so it’s also worth the risk to sneak in and try to steal some of it. But unlike the BTs, stealth against humans is not good. Thanks to what seems to be effective x-ray vision, it’s really easy to trigger an alarm even when hiding behind a wall, and then the whole base goes into action mode. It doesn’t quite feel as cool as it should, and so it’s usually better to just bring a few weapons and go full John Wick on them. MULE AI isn’t that smart either and they often just run at you in a straight line or take shots at you out in the open. With a main theme of the game being about the sense of community between people, it sounds like it would have been a great opportunity to feature enemies that directly contradict that. Instead, it just feels very remiss.

With these in mind, the problems with Death Stranding run far and wide. On the other hand, the sensation of hiking over a tall mountain, across an empty field and then through a deep river while watching your footing the entire time is a lot more fun than it sounds like. The music, visuals and controls all work together to help achieve that vision, and coupled with its excellent social features, it creates a feeling of connectivity with other people that many other games have been unable to do. While I’m still unsure of if I think Death Stranding is a good game, it’s an experience worth trying. 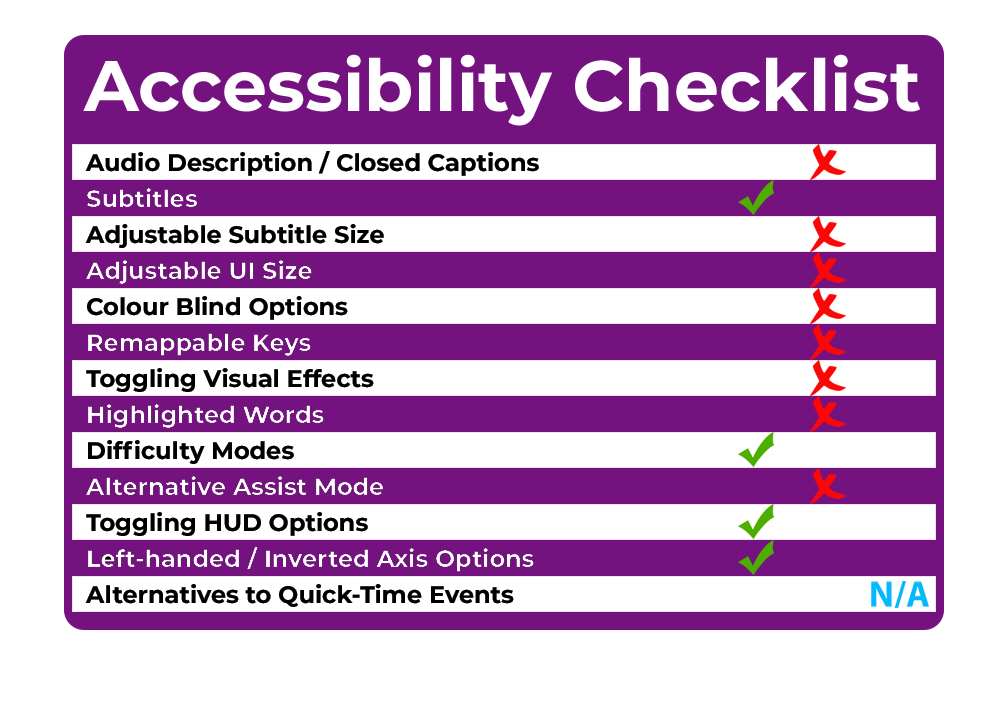