Picture this: you’re playing a video game and it’s nearing the end of a chapter when you’re presented with a choice. Rescue an old lady from a burning building or pull a child from a nearby car wreck. You only have time for one before the other perishes, so you make your decision and the chapter concludes. Sometime later, you start the next one only to realise that character you saved has departed the story. It leaves you feeling a little bitter, like the choice you dwelled on for so long didn’t have a huge narrative impact in the end.

This was a common phenomenon in titles made by Telltale Games, as well as Dontnod’s Life is Strange, which I’ve grouped into a genre called Choices Matter, a mixture of interactive fiction and point-and-click adventures adapted into a 3D space. Here, the player can explore a location and interact with the objects and people within it. They can select from different options for their character to say in conversation and even make decisions that alter how the story plays out. But more often, the game railroads you onto a pre-determined path, with only very minor dialogue and visual changes to accommodate these outcomes. 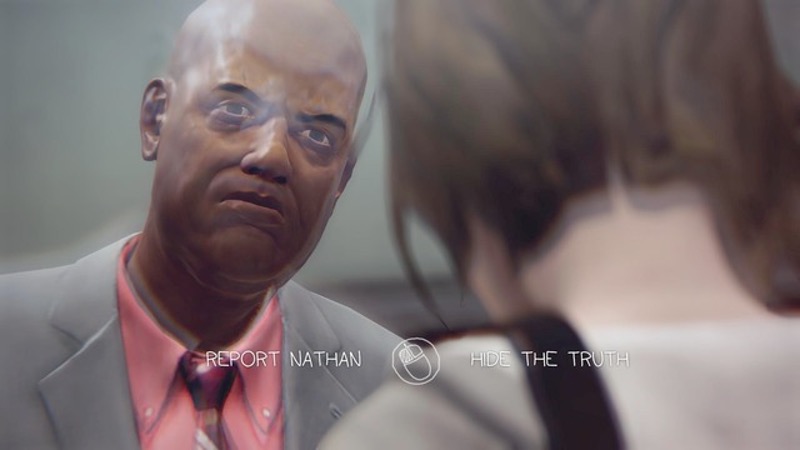 It’s understandable why it happens so much. Development is complicated, and so it’s not practical for Choices Matter games to create radically different narrative branches that change based on player input. Stray too far and you’re effectively creating two whole games from one pivotal moment. Do it several times and you’re looking at a colossal story that very few people will experience in full. Delivering episodic content with a small team and strict deadlines means it’s clear why Telltale and Dontnod offer you the illusion of choice over real, meaningful decisions.

At the finale of Life is Strange, you must choose between sacrificing a single person to save an entire town or letting that town get guzzled by an apocalyptic storm. It’s a tough choice for players who got attached to digital heartthrob Chloe Price over the course of the game’s five episodes, but the outcome for either amounted to very little in the end. If you saved the Bay, the story hits a reset button as Max reverses time and undoes every action you took, but if you instead chose Chloe, everyone dies and there’s no way to see how everything else played out. Essentially, either option wasn’t as meaningful as promised because you could never view the real consequences of the choices you made in the last fifteen hours of playing. Life is Strange 2 is a whole different circumstance however, using the Choices Matter formula much more effectively than its predecessor. This time, you’re not just making decisions for yourself but also for another character. The story follows Sean and Daniel Diaz, two brothers on the run from the law at the turn of the 2016 U.S. presidential election. The player—as Sean—will make decisions along the way that affects Daniel’s moral compass. Invoke more violent actions and he’ll decide that’s the best way to navigate life, but if you teach him it’s better to follow the rules of society, he’ll end up being much kinder to those he encounters on your journey.

These smaller but more frequent choices build up an invisible metre that measures Daniel’s morality, always running in the background between every action you make and affects his behaviour in the game’s closing hours. There are seven endings in Life is Strange 2, and the one you get is ultimately decided by Daniel. In other words, the character has agency due to being the decisive force behind the climax, even if it is shaped by your own actions. This is a fluid way of approaching design principles of the Choices Matter genre. The biggest consequences of your actions are now much more subtle, with seemingly important choices taking a backseat over the smaller things you do in the story. It’s telling that when the end of each episode shows how your decisions lined up with others players’, there’s a whole section dedicated to Daniel. Even in the final one, his overall behaviour is determined by his morality rating.

Returning to Telltale Games, this kind of design wasn’t wholly adopted in all its games, but it calls back to the ending of The Walking Dead’s first season. As protagonist Lee Everett lays dying of a zombie virus in the game’s closing moments, he confides in his young companion Clementine (who plays a similar role to Daniel) to either shoot him before he turns or leave him for dead. If the player stays silent, she will instead decide based on the player’s previous actions. I’d love to see more games with choice-based gameplay take this approach to branching narrative design. Interactive fiction doesn’t always have to involve these colossal final decisions. Instead, use smaller behavioural cues that is fed into a system which decides the outcome for you. To me, it’s more authentic to have certain events feel out of your control. The stories themselves are less artificial, and it makes every decision you make much more impactful. The Choices Matter genre has made huge strides in the last few years, but I think it’s full potential is still left untapped.