The James Bond video games dominated the early years of the games industry. During the ‘80s and ‘90s we got a lot of tie-ins, with A View to a Kill, The Living Daylights, and GoldenEye receiving their own dedicated tie-in release. The 2000s then branched it out a bit to include original stories using the familiar characters and gadgets. 007: Nightfire, Everything or Nothing and Blood Stone are the best examples of this, which each featured the likeness and voice of their respective Bond actors at the time while also delivering a brand new story penned exclusively for the game.

But in the years since, we’ve had a huge dearth of Bond video games. The last major title to be released was 007 Legends, which coincided with the movie franchise’s 50th anniversary back in 2012, before going on an unofficial hiatus soon after.

That is, until it was announced in November last year that IO Interactive, the developers behind the successful Hitman series, would be reviving the franchise with a new Bond video game called Project 007.

I’m certainly not the first person to say this, but I believe IOI is the perfect fit for a Bond game, if only because its recent Hitman games have been extremely Bond-lite in their presentation alone. Each of these games have featured lavish, complicated locations full of grandeur. They’re modern and exhibitive, not too dissimilar from a Bond villain’s secret lair.

In his piece ‘Hitman 3, James Bond and the art of the villain’s lair’ for The Face, video games critic and architecture expert Ewan Wilson writes:

IO Interactive has clearly studied the kinds of dramatic sets and architecture you find in Bond films. Production designer Ken Adam created the volcano base, which was accessed through its own giant hole after the roof retracts. Likewise, Hitman’s Mendoza villa feels like a bunker from within – the only thing missing is a tank filled with vintage wine for Don Yates to drown his enemies in.

There are elements of another Ken Adam set, this time the lair from Diamonds Are Forever. Based on John Lautner’s Elrod House, this refuge is another modernist abode built atop a craggy mountain ridge. Like many of Hitman’s best levels, it not only offers luxurious views but mixes inside and outside areas, with parts of the architecture seeming to stretch and blur alongside the natural world.

This trend continues in the recently released Hitman 3, in which older buildings are given a slice of modernity as newer structures are annexed onto them. The Chongqing level, for example, is set in a tight inner-city neighbourhood based in neon lighting and claustrophobic alleys. One part of the level features a target running unethical experiments on the homeless inside the apartments – a ploy very similar to what you find a Bond villain doing – while deep beneath this place is a secret underground data facility unseen by the public, with a fully modern design and high-tech framework.

Similarly, this design principle of juxtaposing modern architecture alongside older buildings is also seen in earlier Hitman levels such as the Swedish consulate in the Marrakesh location, the high-tech bank vault in its New York stage, or the underground Ether Lab in Sapienza, which even bears a striking resemblance to Scaramanga’s seaside lair in The Man with the Golden Gun.

Where I think IO Interactive demonstrated this technique best was in the finale of Hitman 2 where you travel by boat to the secluded Isle of Sgail. The entire island is dominated by a large gothic castle, complete with old stained-glass windows, rib vaults, huge arched doorways and wide stone rooms. However, one of the level’s villains resides in a huge glass box that is sprouting from the top of the castle; a huge eyesore, and yet solidifies its everlasting menacing presence by looming over the guests as they attend the party going on down below. It feels so 007-like. 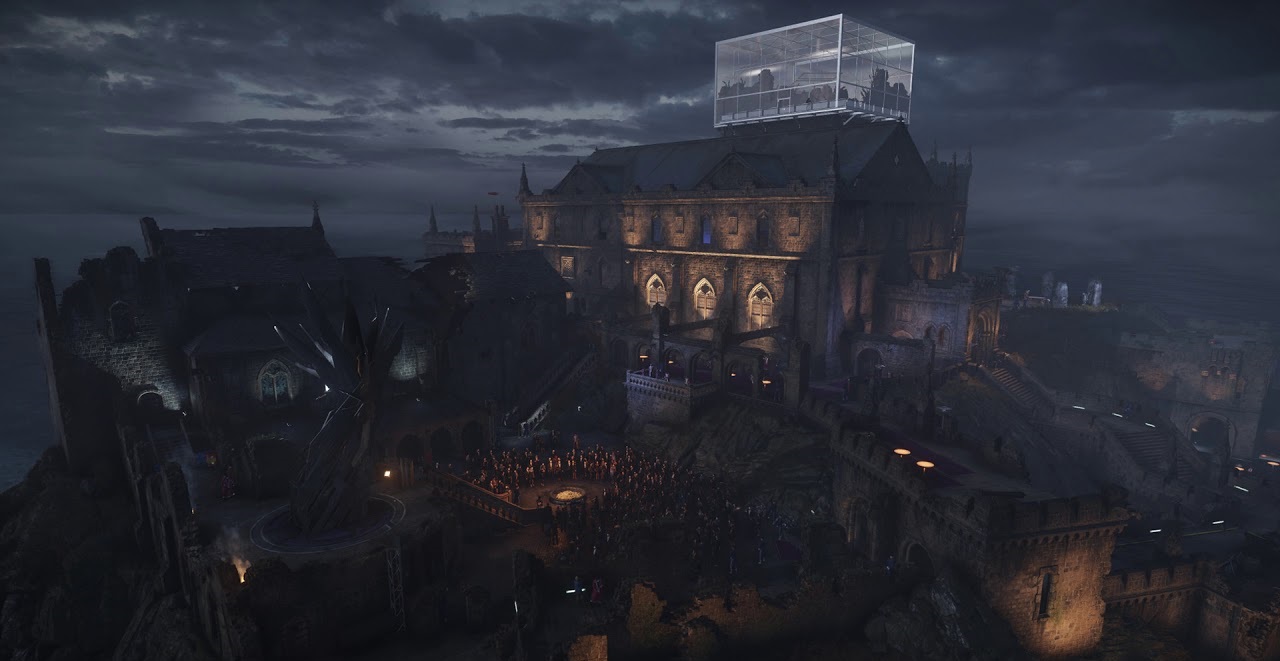 It takes more than just the exotic locations to make a Bond game, of course. The unusual gadgets are another key component of any 007 story. Often unconventional in their design, the films feature all manners of gadgets that Bond uses to overpower or outsmart his enemies, with some highlights including the fake fingerprints from Diamonds Are Forever, the exploding ballpoint pen in GoldenEye, and the camera ring from A View to a Kill.

Similarly, the Hitman games have also featured gadgets like this, which are usually rewarded to the player for completing challenges in a level. Agent 47 can bring a keycard scrambler to open locked doors or use a ringing mobile phone which acts as a flashbang grenade to anyone who answers it. These certainly aren’t items that would be out of place in a Bond story.

It’s also worth noting that both Bond and Agent 47 are good at improvisation. The Hitman games encourage you to approach each level with extreme care, learn the patterns of your targets and think up creative solutions to any problems you face. While past Bond games have often been repainted Call of Duty titles, mere shooters with Daniel Craig’s face plastered all over them, Project 007 is an excellent chance for IOI to take the emergent gameplay of Hitman’s social stealth and retool it to include the wits and swagger that the Bond character exhibits.

While I don’t think IO Interactive should make Project 007 ‘Hitman but with more tuxedos’, the formula for a modern Hitman game is exactly what a new Bond title needs to feel fresh again. I think we’re beyond the blockbuster shooter aspects of the series that the EA and Activision titles popularised them for, and I’m ready to see a Bond title that calls upon the character’s other strengths.