Firmly situated as a narrative adventure game, Orwell’s Animal Farm brings you inside Manor Farm as it teeters on the brink of revolution. You are not one of the animals, merely a spectator of the farm or maybe even Orwell himself, but the animals turn to you to make the decisions of day-to-day life: rest or work, study or spy.

These choices are made through a basic point-and-click system. The animals represent those actions, where hovering over them will show you the outcomes for each; the core three being changes to an animal’s wellbeing, the food supply, and Animalism level (the communist philosophy espoused by the pigs).

Political choices are left in your hands, though there are some key events that are unavoidable. Do you side with the idealistic Snowball and cheer for the plans of building a windmill? Or do you let Napoleon win in the hopes of protecting the animals from his wrath? Success or failure in Animal Farm is left to be defined by you. It’s a slightly weird set-up but ultimately one that is very freeing.

There are eight possible endings in Animal Farm, and you don’t even need a strategy if you don’t want one. In my first run of the game, I only had two goals in mind: keep the farm in good repair and don’t let Boxer die. I managed both and essentially followed Orwell’s original fable, minus the horse-extermination. My aims completed, I went in again and instead let myself follow my own curiosity. “What happens if I do this instead?” Without the restrictions of winning or losing, I found this run far more engaging thematically.

Theme, of course, is an important element of Animal Farm, if not the central crux of the entire game. To tell this story of socialist corruption and abuse of power, Nerial takes a simple route: dedicating itself to Orwell’s original story. In the background of the farmlands is a page of a book that displays dialogue and narrative beats as you progress, both often including direct quotes and the latter read aloud with powerful omniscience by voice actor Abubakar Salim. The characters feel as if they’ve been transported directly from the page, with each given subtle differences in their mechanics to externalise their thematic and narrative beliefs. Napoleon can gain an increase in his well-being by spying or rationing food, while Snowball increases his own through studying or teaching the other animals. Though it’s not a groundbreaking system, it works that Animal Farm relies on its inspiration for impact. 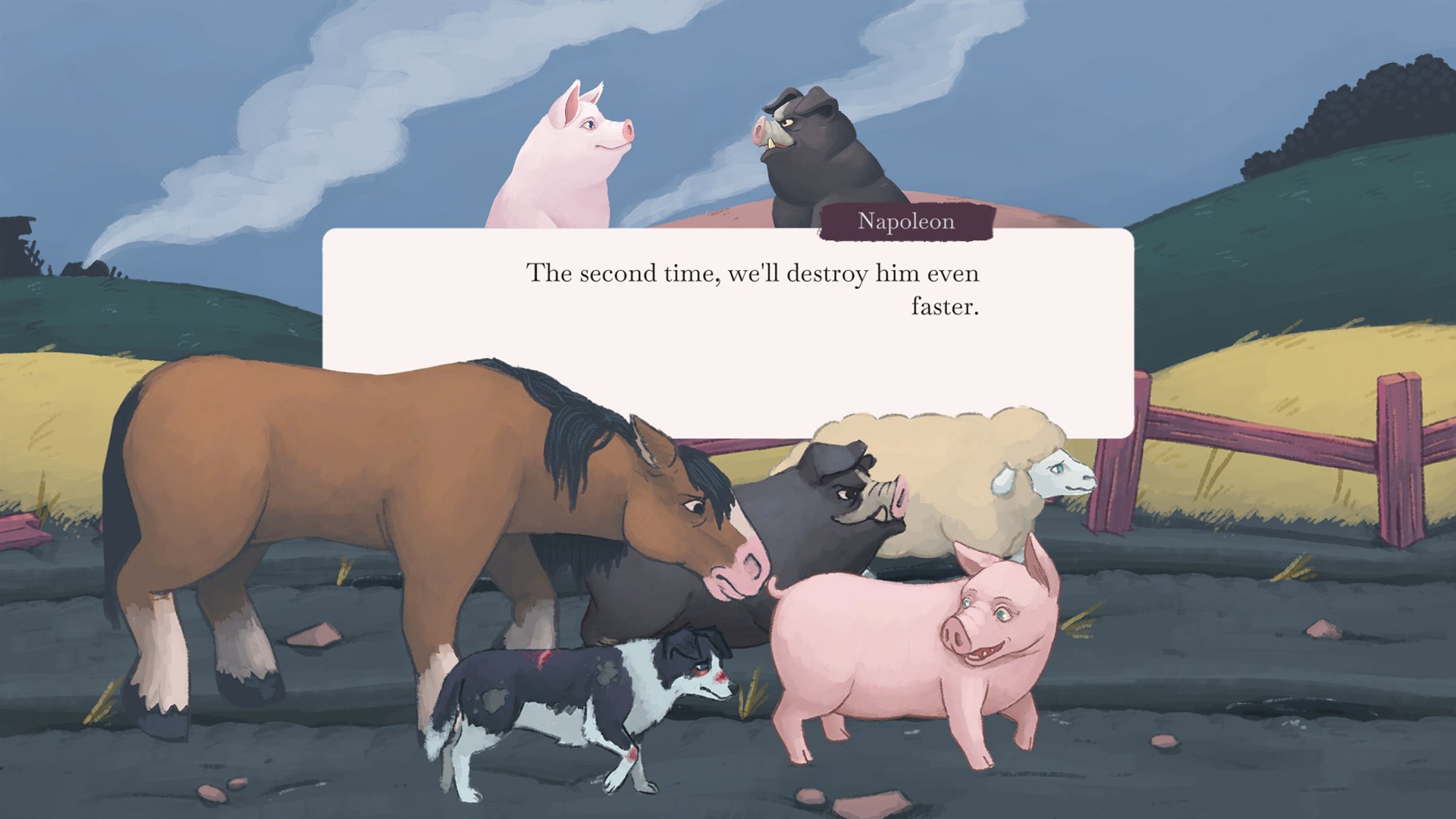 The visuals are gorgeous, if sparse. Throughout the game there are only a handful of settings, one of which is just a barn wall. The majority of the runtime you spend looking over the fields and farmhouses of the titular Animal Farm, designed like an old-fashioned children’s book. This works well because of the ways it ties into the story. Orwell’s setting is purposefully unspecific in time, but its setting isn’t. Cosy independent farms like Manor Farm embody the UK’s self-image. The game captures this and, like Orwell, turns the tranquillity of the scene on its head with revolution. While this is great to see, it does highlight the missed opportunity of making the settings more dynamic. As it is, the floating clouds, changing seasons, and jumping animals lose their potency pretty quickly.

The repetition that comes up in the visuals is also seen in the dialogue. The game revolves around the characters and the interactions they have with other to push the story forward. The progress of the narrative is structured around the success or failure of the farm over one year: for each year you survive, you get a stamp in your handbook. But if you decide not to change your approach to farmwork every year then the dialogue begins to repeat itself.

It’s a shame since many people will only be looking to maintain the farm and keep everyone alive and happy, or as happy as you can be under a dictatorship. These players will likely see years go by in game without any change in dialogue or new developments, while also not being given any real incentive to change their playstyle. Thankfully, the game does lend itself to re-runs which, I’d argue, are the best parts of Animal Farm.

On the whole, the PC version of the game runs well. This isn’t too surprising considering the simplicity of the game’s presentation and relatively low requirements. There aren’t many dynamic elements, but I did find them getting stuck on occasion. Narration, both voice over and text, would load late or wouldn’t load at all and more than once sheep and horses would freeze staring out at me while waiting for me to make a choice without the options coming up. This may come down to my computer’s specs but to be sure you might want to check out other reviews.

Although Animal Farm doesn’t manage to craft an identity entirely of its own, the game excels in bringing this classic fable to a new medium. It’s dedication to its inspiration and beautifully painted visuals are to be praised, though let down by repetitive dialogue and unsteady pacing.  But the best part of all? In this version, Boxer gets to live.