Unlike the traditional Good vs Evil story, which involves a hero setting out to triumph against the forces of evil, Pumpkin Jack shows us a perspective from the other polar end of those morals. In a medieval fantasy land, the Devil has grown bored of living in a world of peace and sends his demonic minions to invade the world of the living. In his haste, he also resurrects the legendary pumpkin lord Jack, who he recruits as a powerful force to kill a powerful wizard who remains the last line of defence for humanity.

Pumpkin Jack is very much a throwback to classic hack-and-slash platformers that dominated the market of the late ‘90s and early ‘00s. Games like MediEvil and the Jak series are even both referenced by developer Nicolas Meyssonnier as being major influences on the game’s direction, and the broader similarities to the trends of that era are obvious.

The combat is a huge example of this, where the controls go as so imprecise and clunky that they feel too outdated for a modern hack-and-slasher. A lot of the time you’re running into a crowd of enemies and waving your weapon around like a little stick, hoping to hit something, but more often than not it culminates in you taking more damage than would be necessary. Just because it’s a throwback to old game design, it doesn’t mean it has to feel so broken like this.

It makes the combat, which is already pretty tough, even more frustrating. Enemies hit you hard and you don’t have a lot of health to begin with. It makes it almost impossible to take on groups directly, so you end up circling the outside of the mob trying to prod a few hits in before repeating. This isn’t even something I felt like I had to do in MediEvil.

With that said, I attribute most of my deaths in Pumpkin Jack to its dodgy platforming controls. There have been so many moments when I tried to jump over a river, believing it would be an easy task, only to be off by several pixels and immediately be given a Game Over screen. Luckily, the checkpointing is actually really generous, and every death doesn’t set you back more than one or two minutes at the most.

In contrast, however, the sense of humour employed in Pumpkin Jack’s writing feels wholly modern. Many of Jack’s lines are hilarious, both witty and punny, and it’s unfortunate the game features only a light amount of voice acting because these lines would be even better with the right actor to bring them to life. The same goes for many of the other characters who appear throughout the game, creating a warm layer of charm with long-lasting appeal.

There are only six levels in the story, which may not seem like much, but they’re fleshed out and long enough that you’ll be spending about an hour on each one. They’re linear stages, as your objective is to take Jack from point A to B – killing enemies and facing bosses along the way – but there are also some secret areas and diverging paths that reward you with secrets. One such example is collectable crow heads that can be exchanged via a creepy merchant for unlockable outfits, letting you deck Jack out in new costumes based on a variety of different themes.

The repetitiveness of each level is also shaken by the inclusion of unique minigames, with each stage having a different one to set itself apart from the rest. They usually involve Jack having to solve a puzzle so he can access a previously-closed part of the map, performing such tasks as moving crates around to jump on or hitting a sequence of musical notes in the correct order. While they aren’t substantial additions to the gameplay, they shake up the pace just enough to feel welcome.

On-rails vehicle sections also take up a chunk of the gameplay, with each level including several where you must jump or swerve out the way of incoming obstacles. These aren’t as fun as the other minigames. They’re often really clunky to control and have really tight margins of error. Worst of all, they’re certainly not made for keyboard and mouse controls, forcing me to contort my fingers in such ways that I felt like I was on a train going through the carpal tunnel. 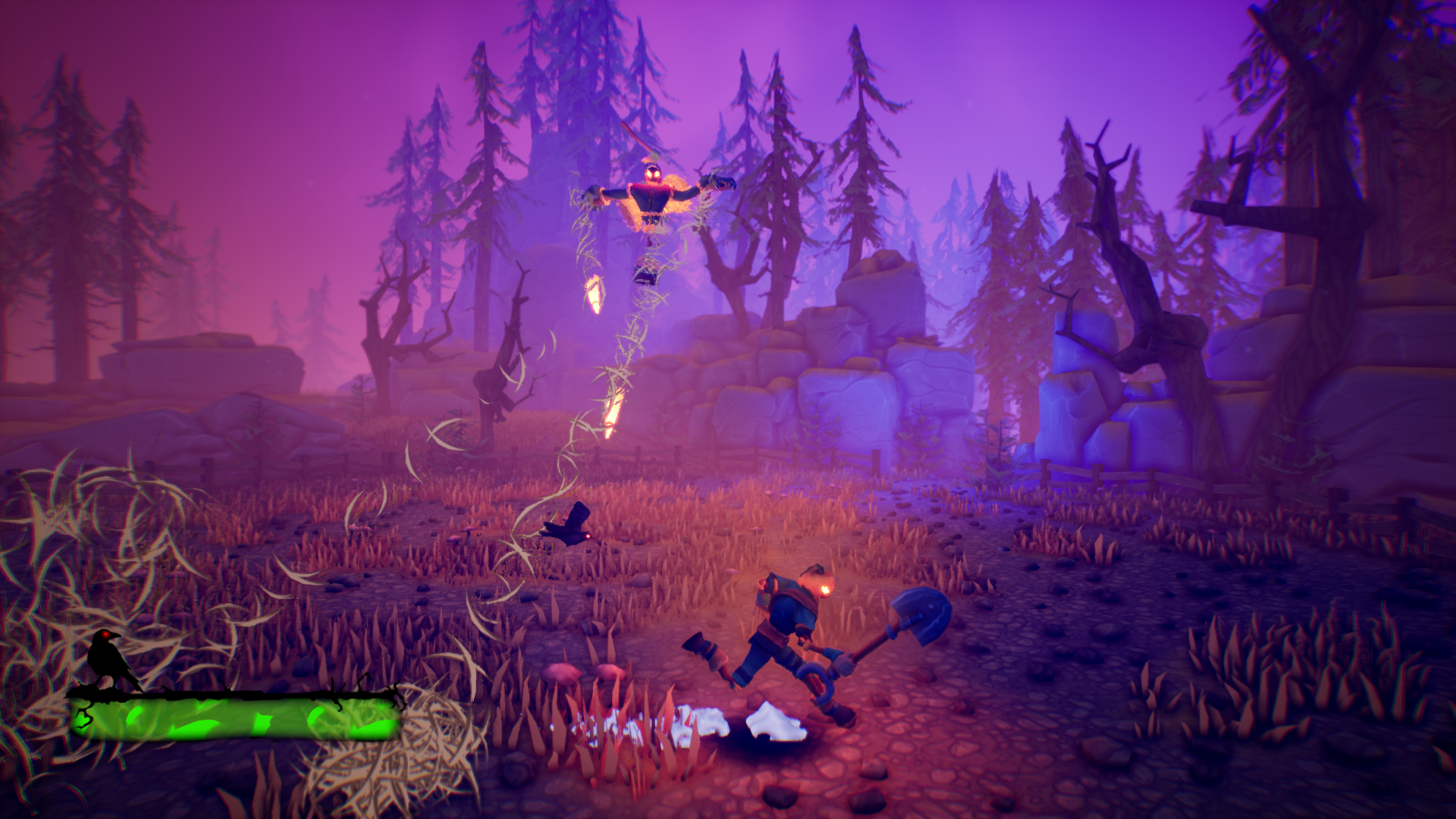 After just an hour or two of play, Pumpkin Jack manages to work past its “MediEvilitis” and craft an identity of its own. It’s an excellent interpretation of dark fairy tales and medieval legends, while also putting its own Halloween spin on those themes. It’s let down by awkward controls and shaky pacing but excels in its funny character interactions and unique boss fights. A flawed but ultimately worthy Halloween title.